On Saturday I was thinking about what to make for Sunday’s Dish of the Week, and I thought of burgers. But then discarded burgers because it would be too cold for the grill. But then on Sunday when asked Dave said burgers too. So we decided on burgers.

During Dave and my staycation in September we ate at Good Stuff Eatery. It is a burger joint In DC on Pennsylvania Ave. in SE owned by Spike Mendelsohn, from Top Chef on Bravo. It was totally packed, we had to wait in line for 30 mins to order and then wait another 20 mins or so to get our burgers. And of course at the cashier is a stack of Spike’s burger cookbook (The Good Stuff Cookbook), so you know I had to get one. Dave thought the burger was…well a burger. And I thought it was good. It was tender, juicy and flavorful. So of course I was excited about his cookbook.

I am totally Top Chef junkie. I have been watching since Season 3 but I have seen season 1 and 2 on repeats. And hardly ever does my fave win. I think Stephanie and Richard are the only ones to win, whom I have liked since the start of the season. Top Chef is currently in its ninth season and up ‘til this season I didn’t think the formula needed changing. But this season is a little stale.

Quickfire, elimination challenges, judges table, take your knifes and go. Over and over again. But can I stop watching…no. So I guess they are doing something right.

Unfortunately for me all my faves this season have been eliminated. So I’m not emotionally invested anymore. But I will continue to watch until the Top Chef is announced.

Now back to Spike’s Redskins burger. I didn’t like it. In fact I didn’t finish it. Dave ate his but it gave him heartburn. So I won’t post the recipe, but I will post a pic below. What is the most disappointing is this is the second recipe I have tried and neither have worked out.

As a loyal Top Chef fave and a big Spike fan, I will try another recipe. Wish me luck. 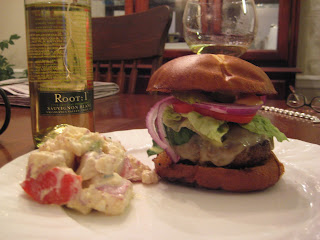